Mochi Doh — Choosing Packaging To Grow With Your Business

You are here:
Client Spotlights 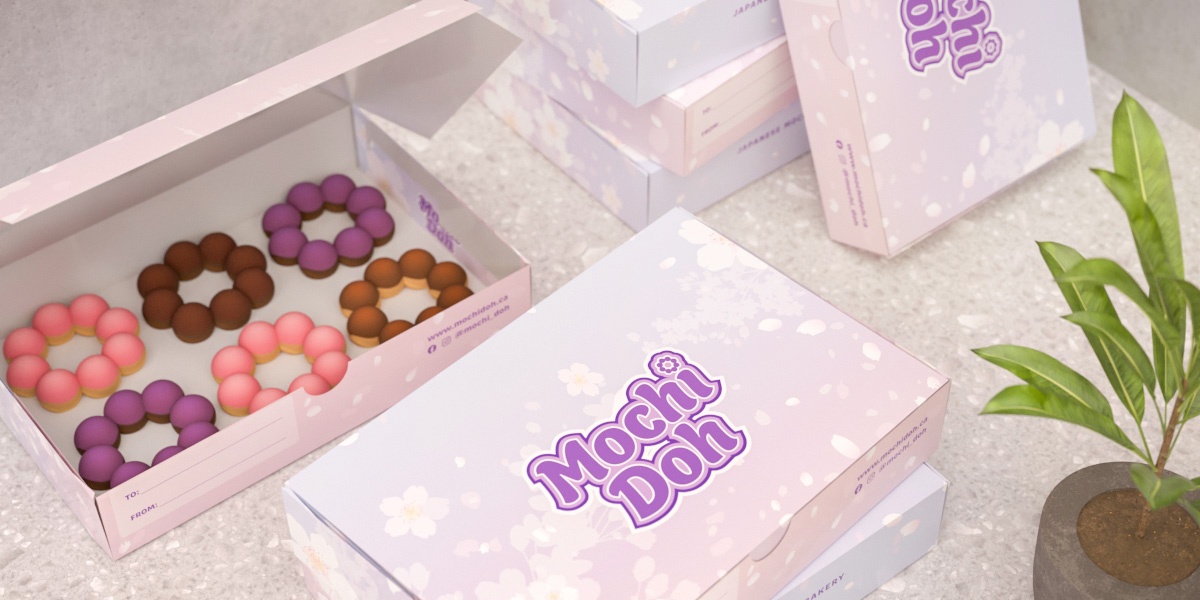 Based out of Scarborough, Ontario, Mochi Doh creates chewy, soft mochi donuts. Making the jump from their home kitchen to a storefront, their goal was to make packaging that would grow with their new business.

We had the chance to sit down with Diana Nguyen (and their mascot Mochi!) to ask her about Mochi Doh’s custom packaging journey. Read on to learn more!

In the middle of quarantine, Diana wanted donuts, and took it upon herself to make them. She took inspiration from the Japanese mochi donuts she saw online and gave it a try!

At first, she and her husband were making the donuts for family and friends. The demand for the donuts from their friends got so high that they made the decision to start selling them from their home!

They set up an Instagram account and began to introduce new Asian-inspired flavours every week. Originally, they took orders via a JotForm and scheduled pick ups. Their business began to outgrow the capabilities of their home kitchen, which lead them to open their physical store!

Since starting their mochi donut bakery, Mochi Doh were using unbranded white Kraft boxes with a custom sticker to keep the boxes closed. Though these boxes were functional, they didn’t match the vision Diana had for the company.

As the company grew, the plain boxes they were using no longer made sense for their needs. They sought packaging that could grow with them as they began to expand their offerings and their business.

After finding us on Instagram and checking out our products, Diana sent us a DM to get started!

Diana’s original vision included a collage of references to Toronto. Originally, she wanted a collage of fun, colourful and bright icons that would draw customers’ eyes. These included the mascots for the Raptors, Maple Leafs and Blue Jays, their dog Mochi, and a reference to the Toronto motorsport park. Our Graphic Designer illustrated these icons by hand to put on the box!

Though this design was everything Diana wanted herself, she realized that this style might not appeal to their customers. She wanted the new design to be something people of all ages and genders could enjoy!

As a result, we completely redesigned their packaging to be more muted and simple based on their new inspiration! The result was a dreamy half-dozen donut box with a soft gradient. We were able to save some Toronto iconography from the original design, but incorporated it in a more subtle way.

One thing we added in this new design was a section to write customer names! Since Mochi Doh takes pre-orders, this is helpful to make sure customers are getting exactly what they wanted.

In addition to the full-coverage, full-colour print, we also added an oil finish to the box’s exterior to add a little shine!

You might be asking: why only a half-dozen donut box, rather than a dozen? Diana realized that customers were buying either single donuts, or quantities smaller than a dozen! The size they selected works perfectly for their needs and can be used for other baked goodies they hope to introduce in the future.

Throughout the design process, Diana was in contact with our Graphic Designer in addition to her Business Development Consultant, Phil. Having our Graphic Designer sit in on meetings with Phil was helpful so Diana could point to specific changes and avoid a longer chain of communication! This was especially useful for when we completely changed the design of her box.

Overall, her favourite part of working with LeKAC was our transparency, flexibility and our ‘yes’ mentality!

Whatever I needed, everybody was just open to it. No just wasn’t an answer. I could change my design last minute and [LeKAC] would be like: “let’s do it!”.

With that being said, if you’re in need of unique custom packaging, contact us today for a free consultation! If you don’t have a design in mind, don’t worry! We also offer branding and graphic design services to accommodate your packaging needs from start to finish.

If you’re in need of a sweet treat, check out Mochi Doh to satisfy your cravings. In addition to mochi donuts, they’ve added mochi waffles and Vietnamese coffee to their in-store menu! Keep your eyes peeled for more delicious menu additions in the near future too.

Kopi Thyme — Packaging With Flavours From Their Roots
10 March 2022