The History of Chinese-American Takeout Packaging 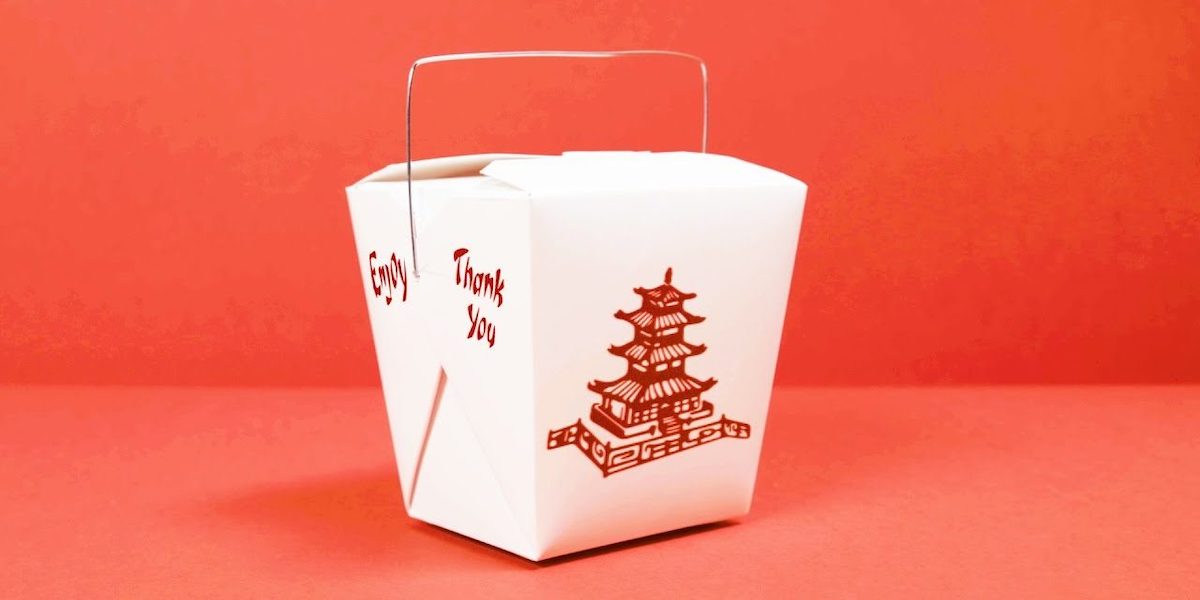 The Chinese takeout box is an iconic takeout container. One look at its folded shape and wire handle tells you exactly what’s inside: Chinese food.

Let’s look at the history of this iconic box, and how its design set the standard for the Chinese-American takeout culture.

What is the Oyster Pail?

Firstly, what is an oyster pail? An oyster pail is a wooden pail that is used to carry raw oysters.

Inspired by its design, F.W. Wilcox, an American inventor, tried to create a pail which would be ideal for food packaging.

He quickly ruled out wood because it’s a porous material, making it hard to disinfect after each use. In fact, wood absorbs water instead of just keeping it inside. This absorbent quality is a perfect place for fostering bacterial growth, which no one wants around their food!

To overcome these health risks, he chose paper because of its disposable nature. As a result, Wilcox successfully patented the paper pail in 1894!

The waxed interior of the folded paper box works similar to the original oyster pail. It allows liquids and moisture to stay in, and can unfold to become an eating plate.

In addition, the paper pail container is cost-effective and easy to carry!

The Origin of Chinese-American Takeout

Secondly, it is important to know how Chinese takeout even came to be.

Chinese takeout rose to popularity in the mid-1800’s after Chinese immigrants came to America seeking gold. These immigrants settled in the United States Post-War and began opening restaurants to support themselves.

The paper pail became the perfect vessel to allow patrons to carry their food home. It is leak-proof and can hold moist dishes while keeping its contents hot. In turn, Chinese food and paper pails have been inseparable ever since.

Nonetheless, the Chinese food inside the box is not really authentic Chinese cuisine. The dishes that we consider “Chinese” are actually more suited to American tastes. So although oyster pails are popular food takeout containers in America, you would have some trouble actually finding them in China!

Eventually in the 1970’s, a graphic designer from Fold-Pak made an update to the plain white box. A red pagoda and text that says “Thank You” in a font meant to look like Chinese calligraphy were added.

Consequently, this formed a strong association to Chinese cuisine, resulting in the heavier use of the paper pail. Now, the shape of the box alone signifies a strong resemblance with the cuisine even without the pagoda.

Thus, Chinese-American takeout packaging truly follows the 3 P’s of Packaging. The paper pail protects and preserves the food, while its presentation has become a hallmark of Chinese takeout.

Although the red and white is the most iconic version of the oyster pail for Chinese takeout, the designs are starting to change!

Nowadays, oyster pail containers are changing to display brand names and their unique designs. With a variety of colours, prints and finishes, the possibilities for customization are endless!

Read our previous post about the importance of customizing your takeout containers to learn more about why it’s so important to brand your box! After all, it was the branding of the paper pail that associates it with Chinese food!

Interested in finding out how you can get customized takeout boxes for your business? Contact us today for a free quotation!

What Is Typographic Hierarchy?
14 October 2021